A Memorial to my Sweet Moonbeam Cat

This is my year of Trusting Him, so instead of tears and why’s as I mourn the loss of my 3rd cat I’m writing a memorial to celebrate 4 1/2 blessed years with sweet Moonbeam kitty.

I met Moonbeam cat on 27 June 2005 when my roommate Virginia cried out, “Hey, Missy! You’ve got to come see this!”  She was sitting on the porch with a tiny orange and white kitten on her shoulders. Off next to her was another grey and white kitten. He had jumped up on there all by himself and was the most affectionate cat.  Virginia, who is allergic to cats, insisted that I call my fiance Derek right that instant so that he could keep them. 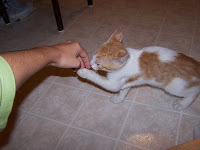 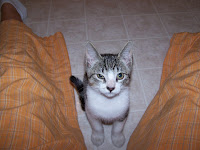 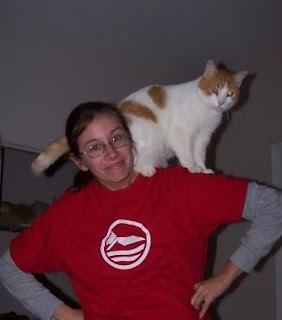 Voluntarily Reenacting how He Introduced Himself to Virginia

We begged and pleaded and whined to get Derek to agree to take the cats. He agreed on one condition: only if they were at the condo on their own the next evening and only if we did not feed them.  Virginia later confessed that she fed them soymilk.  The following morning I let them nibble some of my pancakes as I ate breakfast with them on the porch.  When I came home that evening, Virge had the little babies pinned up in the bathroom.  Derek was getting sweet kittens whether he liked it or not (and he loved it!). I grabbed food, a litter box, and a kennel and drove them 3 hours to live with Derek in Clinton, SC.  We named them Moonbeam and Shadow.

Moonbeam and Shadow kept Derek company in that lonely year before we married.  They snuggled up next to his feet in bed, climbed his curtains, pooped in his bath tub, and wrestled on every surface in that house!  Derek and I married the following May and we loved to watch those sweet kittens run at each other head on and meet in a bundle of fur midair. Moonbeam and Shadow also loved taking evening walks with us around the block.

Causing Mischief before Derek and I married

In September we moved to Travelers Rest.  Moonbeam was terrified of the three horses that lived across the street. For over a week our city cat lived in this giant oak tree. 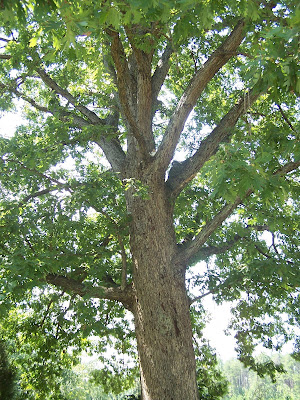 Can you find Moonbeam? 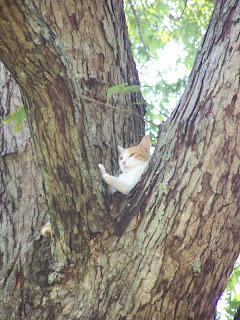 Moonbeam had a rough adjustment to his country kitty life.  Moonbeam lost his buddy Shadow, made a new friend in Dipstick kitty, and lost Dipstick kitty too 🙁  Finally, we got Olive cat.  They were friends on a limited basis:  as long as Olive cat got to eat out of the food dish first. He had many trips to the vet for abscesses and such, but the best trip was for stitches.  Stitches for what?  Why that crazy cat got pecked by an evil mocking bird! 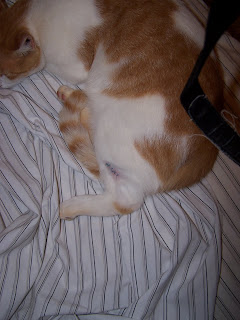 Yep, this massive gash was caused by a Mocking Bird.

Eventually he loved his country life.  He spent his days hunting, teasing dogs, watching the horses, and, of course, going on walks with me and Derek like he was a dog on a leash. 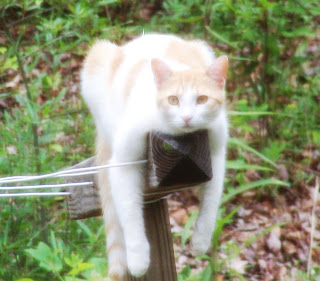 Ah… the life of the country cat.

Finally we moved to this house last Novemeber.  I attempted to make him an inside kitty for fear that the suburbs would kill him.  My first trimester with the girls passed during that inside time.  He laid on my stomach as if he were keeping the eggs warm every day when I napped.  Finally, I could keep him in the house no longer (due to his destructive stir craziness) and I let him out. 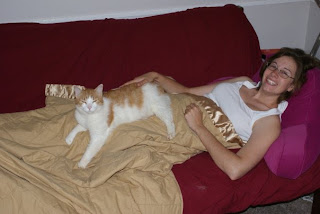 Just before the start of my 2nd trimester, Moonbeam took care of me when Derek wasn’t home.

Moonbeam kitty hasn’t been home now for over 2 weeks and we miss him like crazy.  Every flash of orange looks like it might be him.   But most of all we miss seeing him greet us when we came home rolling in the driveway in his excited plea for attention. 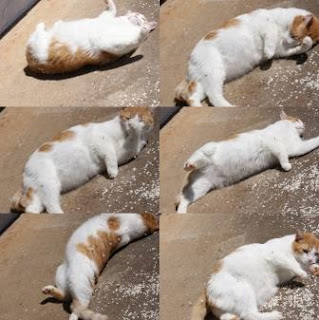 We miss you Moonbeam cat.  You were the best cat ever! 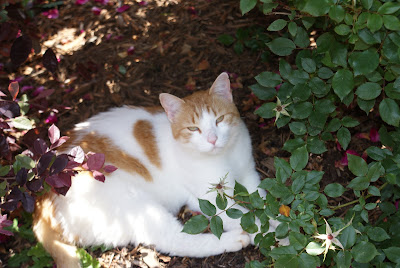