In the Dirt Serving {Construction School for Wives} 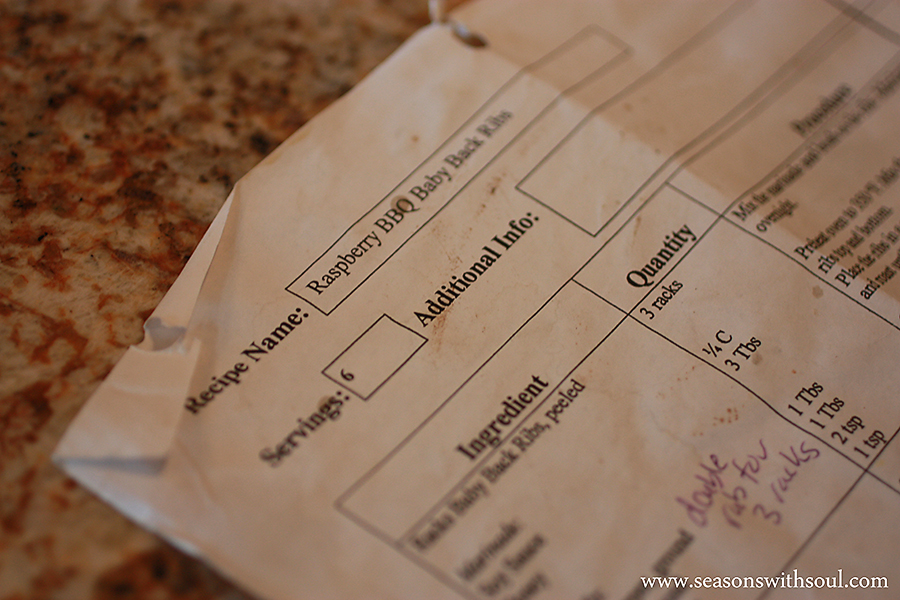 I pull the wrinkled, stained page from my recipe binder. Raspberry Barbeque Baby Back Ribs. I need to get these ribs marinated. To do them right, it takes three steps, and two days.

First, a honey-and-soy-sauce marinade is brushed on the racks, and they’re left to soak up those sweet-savory juices overnight. Next, a pungent spice mix is rubbed on, and the ribs cook low and slow in the oven, ‘til the meat practically falls off the bone. Then, the homemade barbeque sauce is made … molasses, a touch of brown sugar, allspice, vinegar, ketchup, and raspberry jam. A low simmer melds the flavors. A final turn on the grill finishes them off, basted liberally in the barbeque sauce.

This has been part of our Father’s Day tradition for years, and it’s also part of my annual gift to the dads in my life — but tonight, it just feels like a duty.

We just got back from my oldest daughter’s last softball game, and of course, we had to stop and get frozen yogurt afterward to commemorate the season properly. So, it’s late – reaching toward 9:30 p.m. – and I know our three-year-old, Adam, hasn’t had a nap and desperately needs bed.

We’re leaving the next day to visit my parents in Ohio for Father’s Day weekend. And, I’ve been  hoping, as usual, that my husband could bathe and put our three-year-old son to bed.

Because, these ribs won’t make themselves.

I’m grumpy. It’s late. And, my husband won’t do what I want him to.

Last month, I was supposed to choose an area in my marriage to work on – a way that I can glorify God and be more of the wife He’s called me to be. {Let’s call this one Melissa’s fault, um, inspiration.}

At first, I choose prayer. I’m a terribly spotty pray-er, and I want to pray in a more focused and consistent manner. It’s a personal goal of mine.

And, I reason, who couldn’t benefit both from praying more {me} and being prayed more for {my husband}?

But, I sense a hard knot of obstinance around another area in my marriage. Service. You see, I am a stingy server, when it doesn’t suit me.

I will make you an awesome, four-course, gourmet meal – when I feel like it.
I will go out of my way to make plans for a special outing for just the two of us – when I want to. I will help you with a project – when I’m in the mood.

I’ve written a classic “serve” scripture on an index card and placed it above the kitchen sink, where I’m sure to see it.

I will memorize it, reflect and meditate on it, internalize it. I will pray on it.

Beside that index card is my weekly two verses from Psalm 139, which I’m working on memorizing in its entirety. My eyes skim over my Serve verse and work on Psalm 139 instead.

Did I mention I’m stubborn?

But, God still softens my heart enough to know this: It’s surprisingly specific, but definitely service-related. And it’s sitting in our driveway right now, a mini mountain of the double-shredded stuff.  Mulch. 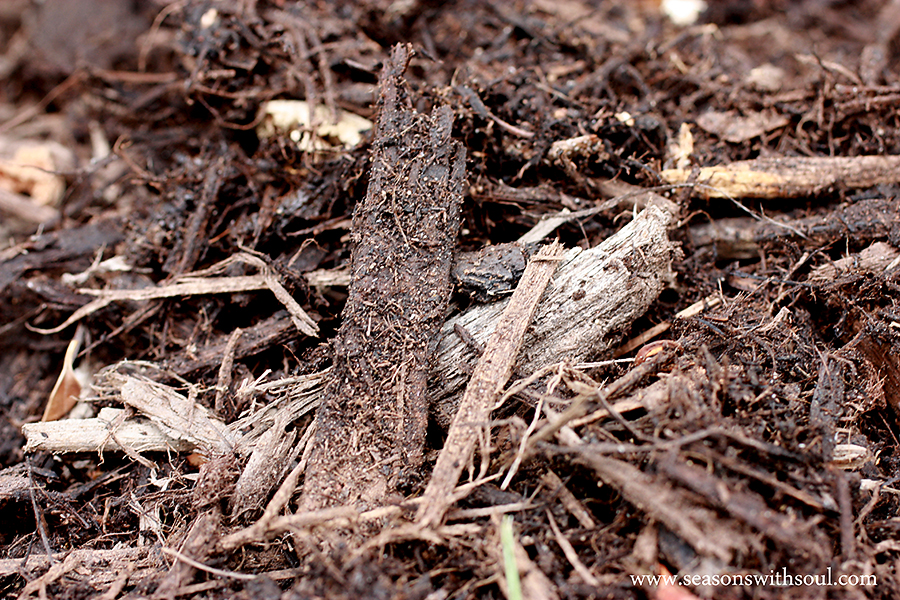 I put on faded black shorts and an old tank top after dinner and announce it’s family mulch night. The girls load buckets with mulch and bring them to me in the narrow bed filled with hosta and spirea, where I’m arranging swathes of dark-brown bark. Adam even gets in on the action {until he gets bored}, filling the bed of his big dump trunk with mulch. 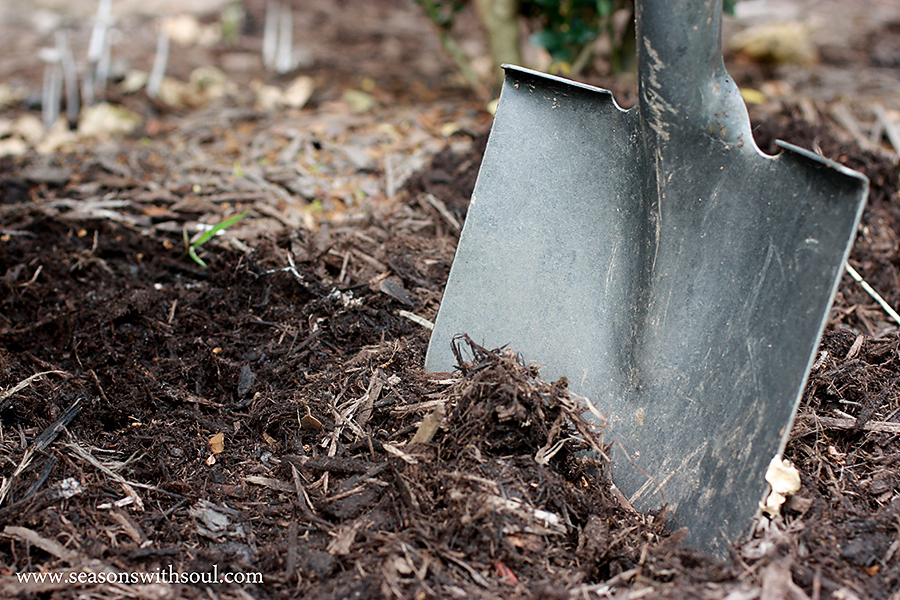 I swipe at my brow with a dirty glove and know I’ve just painted a dark smear.

But, Bob walks past me to the back yard, stops, and smiles. You look good, working there. He says.  And I know he means it.

As much as I might want to think romance means putting on a dress and high heels for a night out, my husband just might prefer seeing me in fitted workout clothes, hefting a bucket of mulch.

And I start to realize that serving like Jesus is not just about working hard, or making something for someone else.

Serving like Jesus means working hard and making something for someone else, even when you don’t want to. (<— Click to Tweet) It’s about serving another they way they want {or need} you to, not the way you feel like it. 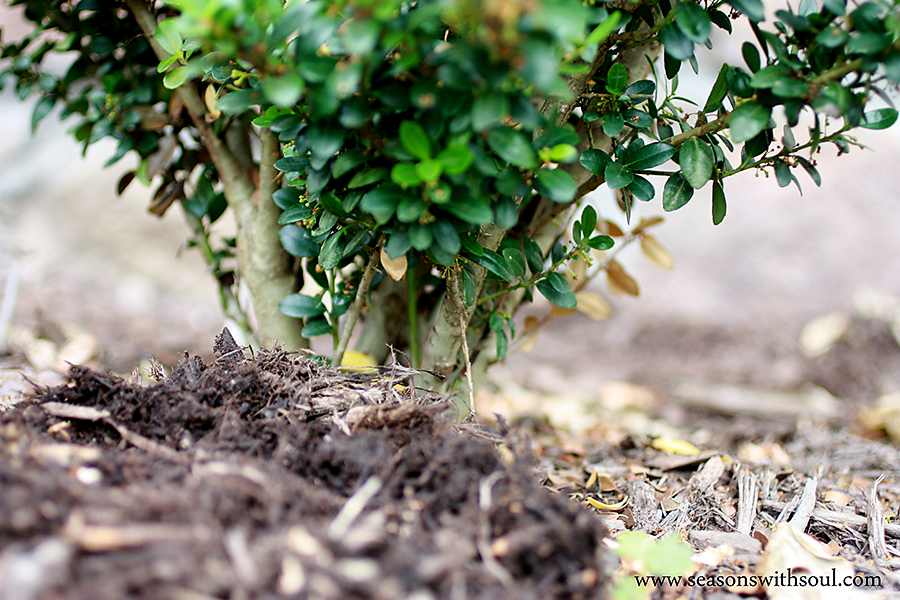 And, the funny thing is as the soft late Spring twilight descends on our mulch-covered family of five, I realize that this time outside, together, has been a blessing to me.

Though I never would have chosen it.