Seeing his Interests before Mine {Construction School for Wives}

It’s Wednesday here at Quiet Graces and that means today is the day where wives are digging in to the dirt in our own marriage and, with God’s grace, growing it better wives. Today Danielle is writing about putting the needs of our husbands before our own. Such a challenging topic for selfish folks like me.

This month I’m going to be working on putting Adam’s interests before mine. There are so many areas that I thought I was doing this in, but realize that I’m not. So, for the next few weeks I’ll be chronicling this in a journal style. Here goes.

Adam got up before I did and I was grumpy that he didn’t let me shower first. This meant that I came out later and that the kids were up – translating to, ‘no quiet time’. But God caused me to think. Maybe he needed to get to work early today, and wouldn’t I have been selfish to cause him to be late just because I wanted my time.

I received an e-mail from Starbucks today for 50% off an espresso beverage. There, larger than life, was a white chocolate mocha – my all time favorite drink. The first thought that came to mind was  “I know what I’m getting this week!”. But then I stopped because Adam loves toffee nut lattes. So, as much as it     pained me, (I admit it, I AM SELFISH) I forwarded him the e-mail so that he could enjoy the treat.

… In humility count others more significant than yourselves.

I got up before Adam and was able to get to my quiet time today. But in order to love him and put his interests first, I put the coffee on before I sat down to read and write. This sounds so simple, but the desire for my wants is strong. I admit I glanced at my journal longingly a couple of times. 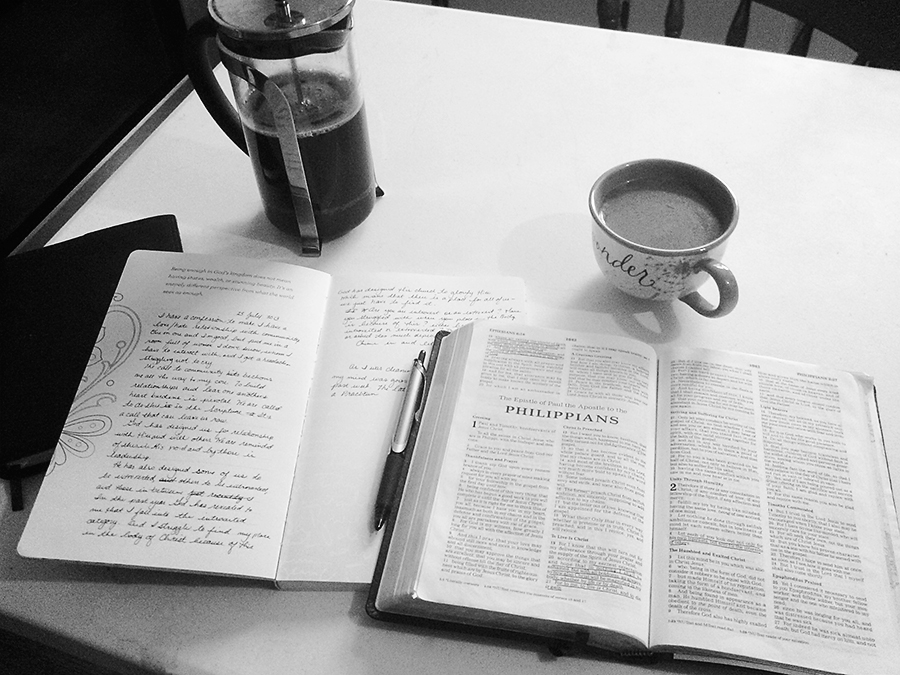 Today my mentor brought by a dozen doughnuts- 3 of which had chocolate frosting. I split two for the kids and left the others in the box. Let me mention two things  – I’m undisciplined and I love chocolate. My husband also likes chocolate. I ate the last chocolate frosted doughnut. I gave in to selfishness. It won out and I gave into sin over a chocolate doughnut. When I put it that way, I want to hang my head in shame. Because isn’t that what sin is, sweet at first, but then leaves a horribly bitter taste on your tongue and a heavy ache in your stomach?

Today is Friday! Tonight I actually got the dishes done before the kids went down for the night – an amazing feat all in itself. So, I sat down with Adam after some quiet time to watch something. Hadn’t quite planned on what he picked – clips from different late night shows. I admit, they were funny, but not on my top 10 things to watch (come on, what is really wrong with Downton Abbey?)

But, I had to stop and think. Maybe watching Jimmy Fallon’s ” Hashtags”  is relaxing to him. Maybe he needs the levity. So, I didn’t say anything. By God’s grace, I put my silly selfishness aside and sat with my husband and enjoyed the Roots rendition of Simon and Garfunkel.

For weeks now the desire of my heart has been to go to a business conference at the end of this month. I’ve prayed a lot about it, repeatedly laying the decision in God’s hands. My husband and I talked extensively about it because it would mean his involvement on a large scale. In the end he didn’t want me to go. And though I was disappointed, I agreed.

His interests were more important in that moment. I wasn’t thinking about him in my desire to go. Just my wants.

But the surrender wasn’t as painful as I thought it would be. God’s grace is sufficient, isn’t it?

And this morning, after the alarm went off, my husband took me in his arms and whispered to me that there was no one else he’d rather wake up with, that I was his favorite person.

The tension that this desire was creating between us was gone. God had restored unity.

I won’t pretend that this month was easy or that I have this lesson of putting my husband before myself figured out. But I do know that God has done a work in me that has spilled over into my relationship with others. The extent of our selfishness is great, but God’s grace is greater. He has promised us that we can do all things through Him and that even means that you and I can put our husband’s wants and desires before our own.