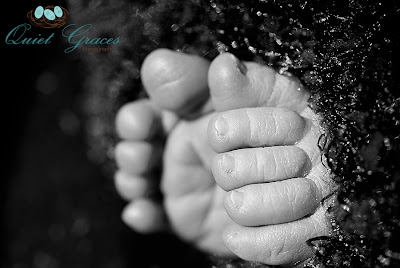 As I’m sure I’ve expressed over the past few weeks… I was so tired of being pregnant. But as anxious as I was to be done, I was also pretty fearful of how delivery would occur.

When I was pregnant with the girls and realized that it was almost certain that I would have a c-section, I wrote this post. I truly wanted to have an unmedicated homebirth. Now while the c-section was not altogether a terrible experience (I did get the most amazing pair of baby girls!), it did complicate my wishes for this birth. In my state (and the two states neighboring me close enough to drive to), I cannot be attended by a midwife as a Vaginal Birth after C-Section (VBAC) patient. That resigned me to another hospital birth attended by OBs. All of this was very disappointing to discover, but I took a deep breath, asked Jesus to guide my decisions toward this birth, and entrusted the results to his hands.

I switched OB providers to the local practice that was widely recommended by other VBAC hopefuls and successes. That practice also happened to deliver at a hospital with wireless monitors, a laboring tub, and a decent rate of VBAC success (especially compared to the 40-60% c-section rate with my old provider/hospital combination). The practice was small and with only 4 doctors who all said the same things about my VBAC, I continued to prayerfully have hope.

I wrote out a lengthy birth preference plan and hired an amazing doula-in-training whose name is Rochelle. And then I waited (rather impatiently) on the Lord’s and Little One’s timing.

Monday October 17th, labor began. S…….l……oooooo…..w……l…….y. I had decently painful contractions about every 5-8 minutes. I called Rochelle to let her know. I called “Aunt” Ruthie to let her know she might be needed to spend the night with the girls. And I waited. Around 11-12 I was pretty consistently 5 minutes apart so we told Ruthie to come on over and sleep in our bed. Around 1 we laid down for a little rest. And over the course of the next 2-3 hours everything fizzled out to about every 20 minutes. Rochelle called to encourage me that oftentimes VBAC patients had longer early labors and gave me some amazing times for coping.

By 9am, nothing was happening at all. I went to sleep from 9-11 and again from 1-3. That afternoon we took the girls to a tennis court and ran them ragged with sidewalk chalk and a pair of tennis balls. At a little past 8, I crawled in bed to sleep hopefully a long good night.

By 9pm on the October 18th, it was quite apparent that I would not be sleeping the whole night. The contractions had started again and were about 20 minutes apart and painful enough that I couldn’t sleep. I came downstairs and knitted until 11:00 when we decided we’d go lie down to sleep. I could not tolerate contractions lying down. They hurt a hundred times worse because I tensed up. So I sat up in bed for an hour breathing in grace, breathing out eucharisteo (thanksgiving that He was sustaining me) and casually timing the contractions. They were consistently 5 minutes apart. Eventually, I went down to the computer. I was exhausted from not sleeping much the night before… and very frustrated that it looked like I wasn’t going to sleep again that evening.

My dear friend Chanwey, who was blessed to have a vaginal birth with her sweet twins, happened to be on Google Chat. Her words of encouragement to me from 11-12 were a wonderful type of grace sweetly received at just the right time. Thank you for being available, sweet sister!
At around 1, I moved back to the couch to knit in the dark. Around 2, I tried to lay down again. I just could not labor in that position. I finally sat up against a couple pillows on the headboard and practiced breathing in His Grace (for its power is perfect in my weakness) and breathing out thanksgiving for everything I could think of. I dozed between the contractions. Around 3, Derek woke and I asked him to make me a smoothie which I gratefully chugged. Around 4:30, I woke him to discuss whether or not to go into the hospital. We decided that the worst that could happen would be that I would wake Rochelle and Ruthie and then get sent back home… but I was more than ready for change in scenery so we decided it was time.

We called our support ladies, gathered up our gear, and headed to the hospital. We arrived on a dark cold windy morning to an empty maternity ward around 5am. The nurses were excitedly preparing for shift change…