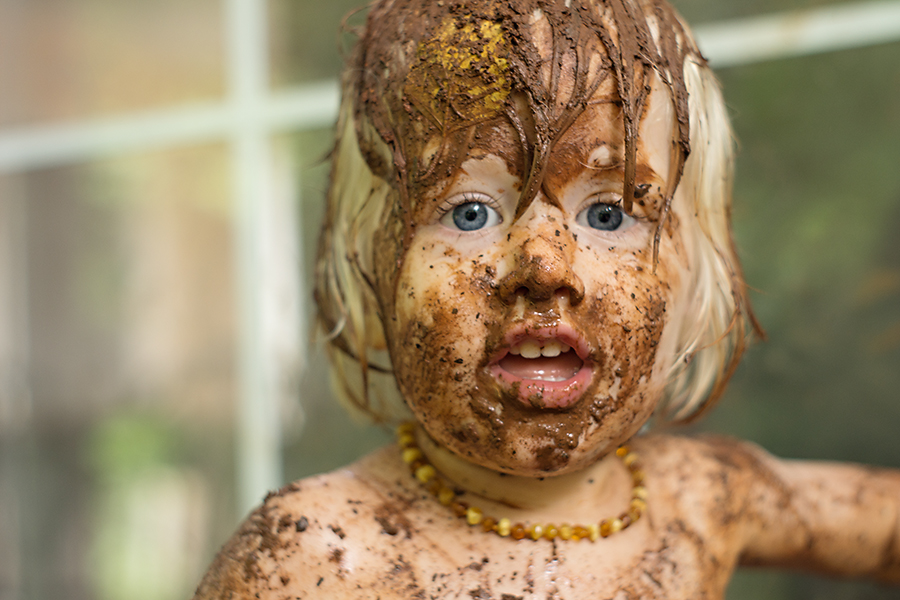 Toddlerhood with a boy is different than the girls.

When the girls were about 2 we tried to teach them how to play chase.  They just ran toward us and snuggled. Sedryn was born to play chase.  He only started walking just days shy of 16 months and the first thing he did was ‘run’ from his sisters who were clapping and cheering him on.

Sedryn’s version of smelling a flower (or ‘bower’ as he calls it) is to stuff his whole nose in the flower and blow his nose as hard as he can.

Sedryn brings me plucked clover flowers and captured stink bugs with equal amounts of over the top enthusiasm.

Sedryn helped me disassemble his crib by using his own Allen wrench and pulling all the little screws out of the crib.

Sedryn doesn’t mind when his sisters dump a whole bucket of mud right on top of his head.

Yet, while Sedryn is full of boyish personality, he’s also a very sensitive soul. He cries when he’s disciplined.  He has a slower rate of disobedience than the girls.  He stops to look at you when you call his name.  He almost bursts into tears as I scream “NO!” when he pulls three tomato plants clear out of the ground after seeing his sisters accidentally pull out two bean plants while picking beans.

Strangest of all: Sedryn has been sleeping in a big boy bed for about two weeks now and has only gotten out of his bed 2-3 times first thing in the morning. That was NOT the case with his sisters :-p

But the thing I love most about Sedryn is his heart for service.  He’s been handing me the silverware out of the dishwasher and saying “ank oo!” for four months now.  He’s even started stacking and bringing me plates now that he’s stronger.  He clears the table and puts dishes into the sink without being asked.  He collects my cell phone wherever I leave it and brings it to me.  He wants to help and he finds a way to do it.

Service is a gift that I hope God keeps growing in you, Sedryn, because it’s truly beautiful to watch.