I just laughed hysterically at my son as he crawled around with a bucket around his neck after dumping the rest of the joint compound dust-slush all over himself.  Of course, I grabbed a camera before rescuing him. 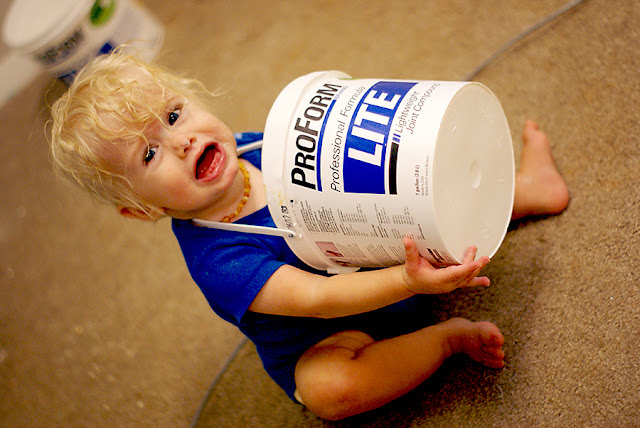 I’m kind of cranky today and that’s coming out mostly toward the girls.  Bronwyn lost her mind at 3 AM because she couldn’t find her stuffed Pooh in her bed.  All stuffed things but dollies are now prohibited from their bedroom as just (?) punishment.

Sedryn woke up on her coattails around 4 and screamed for quite awhile; he shut up when Derek finally went in there with a pacifier.  I’m thinking of chucking 44 pacifiers in bed with him and getting a crib bumper to hold them all inside. That way, whatever direction he rolls, he’ll be bound to run into one! I’d like to sleep about 8 hours a night for a month or more.

I think I hurt Aeralind’s feelings making her clean up the reams of pasta on my kitchen floor.  She had been trying to unload the unwanted stuff into the trash bag.

I actually forced the girls to sit still and do a paper collage project today.  While none of us really had the concentration to complete it… we all needed a break from free play (or free fighting over the same toy).

I’m relishing having a toy time out box.  Suddenly all the doll house pieces are mostly ending up back where they belong.

Purchasing a new (used) car is about to drive us mad.  Derek wrecked at 5 mph a couple weeks ago and managed to total his car.  We were hoping for something with three rows, but since we’re limited by our cash budget… we may end up leaving me with the Corolla for a season and getting him something that will last until the tax return makes our budget larger.  Honestly, car shopping for something I know I’m going to run into the ground (but would rather do later rather than sooner) is harder than house shopping was for us!

The point of this all:  just totally feeling my unworthiness.  That Christ died for me… knowing I’d still wreck on day like this with my attitude…. oh, shear joy.