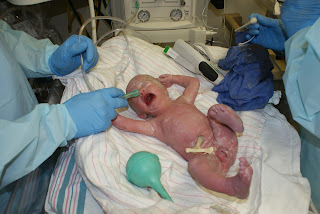 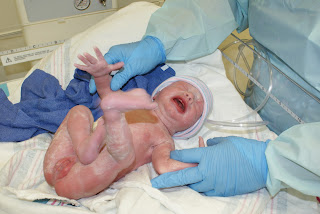 I had my normal NST test appointment at the OB office at 10:30 on 11 September. As usual, one of the girls failed so I had to have a BPP. Finally I got to see the doctor who told me that with my irritable uterus, not to go to Labor and Delivery “unless my water broke.” I left the OB’s at practically 12:50. Sheesh. My sweet husband told me to go out to eat for lunch so I dropped by the library, grabbed some books and chilled out at Panera Bread reading and eating until about 2:30.

I came home and settled in on the futon downstairs to continue reading. I was lying on my left side and Baby A (who was the one to fail the NST) was clearly agitated with me lying on her. I was comfortable so I just enjoyed feeling her kick at my cervix in her displeasure. At about 3:45 I switched to my right side and started a new chapter. 5 minutes later Aeralind kicked open her bag of waters. It was such an odd sensation; just a little trickle which alarmed me so I stood up. Then the fluid began to GUSH. I called my husband while running for a towel. “MY WATER JUST BROKE!” I cried in near hysterics. He was almost to his car by the end of that 10 second conversation.

I was still running upstairs looking for a towel after not finding any in the dryer downstairs when I first looked at the amniotic fluid. There was blood in it! Something I had not been prepared for! My panic level rose. I called hubby again and he said to call my neighbor Diane (whom I’ve only really met twice) and ask her if she could drive me to the hospital. By the grace of God, Diane had just arrived home from some errands. She came over calm and collected and talked my rising panic down to a low level as she drove me to the hospital. That was such a preordained ride together and it was such a blessing!

Once we arrived they wheeled me up to Labor and Delivery and my husband (who sped like a maniac on the interstate) arrived at about 4:30. I was hooked up to the monitors, had the test to determine that this truly was amniotic fluid, and asked to sign the C-section/anesthesia papers. I met the anesthesiologist and his sweet nurse assistant. Then, a sweet red headed nurse named Jocelyn took over my care and informed me that they were aiming for a 7 pm c-section time. So I sent my dear husband downstairs to eat so he wouldn’t pass out in the OR from low blood sugar.

A nursing student/instructor duo came in to insert my IV and sadly blew a vein in my right hand. I felt so bad for her, but I also felt so blessed that I would now have the ability to used my right hand freely once the girls were here! They inserted an IV in the left and Jocelyn returned to pump me full of fluids and continue surgical prep. Derek returned about 6 and we tried to chill out and watch TV. It was some crazy show about catching/studying giant fish that were prone to attack humans. Distracting to say the least. Derek got scrubbed up in that time period and he looked so cute in scrubs 😉 Sometime during this waiting period Dr. Kofed came in the room and gave me the horrifying dangers of C-section speech, but she was calming in that speech somehow.

Right around 7 three nurses stormed into the room. One tossed my IV bag on the bed, the other unhooked the monitors, and the third took the brakes off the bed. They started rolling me down the hall toward OR with very little conversation. I was completely overwhelmed at that moment. Yikes!

Inside OR, Derek was given scrub shoes, a cap, and a mask. He gently prayed with me and they rolled me into the surprisingly tiny OR. He had to wait outside until anesthesia was in place.

I have to say that my anesthesiologist was utterly amazing! He gently talked me through the process and had me sit up and relax my shoulders for the numbing shot. He calmly and confidently hummed while administering that shot and then administering the spinal. He brushed a nerve with the spinal that made my right leg twitch and then go completely numb. They laid me back down and waited for the drug to take effect. He kept testing me with a needle: “Tell me when this starts to feel sharp.” I would respond. After the normal amount of time you could tell the OR nurses were getting antsy to set up their sterile field. He calmed chided them: “Don’t you start anything until I say she’s ready.” Unhappy with his needle sticks on the left side (I could feel them about at the start of my ribs), he informed me that he’d have to do another spinal.

For me, the second spinal was emotionally the hardest part of the surgery. I knew my poor husband was outside pacing the hallway. I could see and hear the nurses would would be responsible for for the babies talking about petty things and listening to the radio. And worst of all, I had NO body control from the waist down. The nurses lifted me into position where I immediately felt light headed and informed them I was “going to pass out.” They hit my IV with a shot of epi and the nurse on the right (who stayed with me in recovery) whipped out an alcohol wipe. “Smell this!” She demanded. My blood pressure stabilized in few seconds and I received the second spinal with the anesthesiologist still humming in his comforting way. I was lowered back down on the bed where, he preceded to stick me until he was satisfied enough with my numbness to give the agitated OR team the okay to set up their sterile field.

Derek was admitted then and he quickly took up residence by my head and rubbed my cheek gently to comfort as the nurses raised the curtain and stretched out my arms. All the fluid in my body was giving me the shakes and they piled a warm blanket on my chest. I informed them I was getting light headed again and received my second shot of epi.

A hospital OB introduced himself to me and let me know that he would be assisting Dr. Kofed. Kofed appeared in the room shortly after that and they began the incision. To my surprise my normally squeamish husband actually watched over the curtain as the Drs. pulled Aeralind out by her feet, then rapidly broke Bronwyn’s water (which he said exploded like a geyser). I heard little Aerlind let out a soft cry and barely heard Bronwyn wimper. I was so scared these little 36 weekers were going to the NICU that I didn’t even want to know their Apgar scores! Derek sat back down in squeamishness as they began to remove the placenta. I asked the Drs. if it was one placenta or two and she replied that it was one large placenta (something that they had been unable to decide via ultrasound before that time). She was unsure if it had been fused or not, but said that judging by their looks we most likely had identical girls. Only time would tell.

About that time Aeralind was handed over to daddy bundled up and BREATHING! I was ecstatic! She was so beautiful and alert! The anesthesiologist’s nurse came over holding Bronwyn, and placed the tiny girl so that she was balanced next to my face. Pictures were taken and babies were kissed as they stitched and glued me up. Next thing I know, I’m being put back on my regular bed and two perfect little girls are riding on the bed with me to my room where we all recovered and attempted nursing and Daddy assisted with their first baths through that nearly sleepless night.

We are so blessed with these sweet girls!