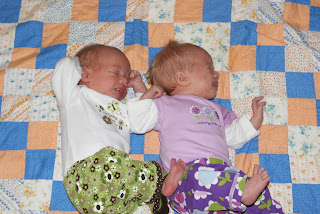 The little people are one month old today! The girls arrived so abruptly and changed our lives so radically, but there is still a sense of denial that we’re parents. Derek and I said it’s more like being made slaves; we suddenly have tons of chores but no ability to procrastinate. If our slave-masters weren’t so cute we might have run away already! 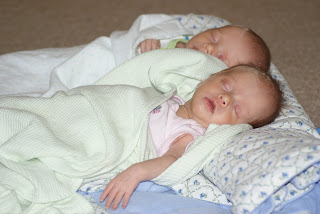 Even though the girls look a lot alike, we can already see distinct personality differences so for the one month post I thought I’d share this for you! 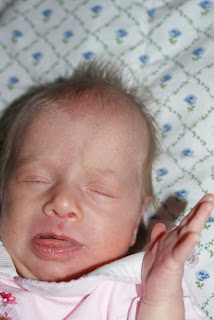 In the womb, Aeralind was a space hog; she elbowed and kneed her larger (according to ultrasounds) sister into the upper corner while enjoying her breech lazy boy position in my left hip. But even though she was a demanding diva about her space, she was also generally the more delicate of the two. Her kicks were softer and her movements less abrupt. She was modest too and covered herself at the 20 week appointment when we were trying to ascertain her gender!

Most of those traits are still evident in this tiny girl. If you carry her upright, she most likely has her arms around your neck. She loves to talk to daddy non-stop during nighttime feedings; she coos the whole time she’s sucking down her bottle. The way she places her hands is so utterly feminine and delicate, but the diva traits are still there. Aeralind threw a fit for daddy on the second day of life because she was upset that he was taking so long to put a new diaper on her. She was so livid that she actually rolled over (back to tummy)! She has what I like to refer to as “diaper diva” status; she’ll wait till you change a diaper that was just wet and then fill the brand new one (or fill your face…). Aeralind likes things her way stat! (please). But you can’t hold a grudge against her demanding nature, not with that crazy cute hair sticking up all over the place. 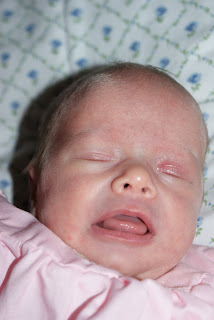 In the womb, Bronwyn certainly made her presence known. She was the first baby Derek felt around 18 weeks at the church picnic. She was totally jamming to the worship music and kicking like a madwoman. She earned the nickname of “Daddy’s little soccer player.” In fact as womb space became more of a commodity, Bronwyn could be seen kicking her sister’s head and bouncing it off my belly!

Bronwyn’s physicality has not changed. It’s almost impossible to keep her swaddled. Her little feet escape from even footed outfits. When we started Tummy Time at two weeks, Bronwyn soaked up ever minute of it like it was the best thing ever, while delicate little Aeralind screamed bloody murder! In fact within the first 10 minutes of her first Tummy Time she had learned to turn her head from side to side. Within the first half hour she had managed to scoot a full foot up the mat. On her due date (October 7) she rolled over from tummy to back FIVE times; I don’t think she’s supposed to be able to do that yet…

I can’t express to you how much we love these little girls. I look forward to seeing their personalities continue to develop over the next few months

*A note about their names: We used Tolkien’s elf language Sindarin when picking out the girls names. We wanted them to be pronounceable on sight, but also have strong meanings. Aeralind was modified from the word Aerlind and Bronwyn was modified from Bronwe.