The Last Few Weeks were Crazy!

It’s been a crazy couple of weeks! First, they (and I) had snotty noses.  Then, the 3-day weekend brought an all day outing with family, some out and about on Sunday, and Monday fun included ice cream at a friends house and free Chick-fil-a Spicy sandwiches (yum yum).

Aeralind has learned to crawl and sit up on her own, (thus limiting keyboard time) Bronwyn has the most amazing and surprisingly quick “inch-worm” type crawl that I’ve ever seen (her upper body is sooo strong), I’ve been sewing a boys’ costume (random I know… but I had the free fabric and the pattern), and we managed to go on a walk yesterday evening before they crashed.  Whew!  I’ll be back to blogging more regularly now (hopefully) and I even have four or five things in my queue including my very first pattern with a tutorial.  I’m super excited!

But for now here’s some sweet baby eye candy 🙂 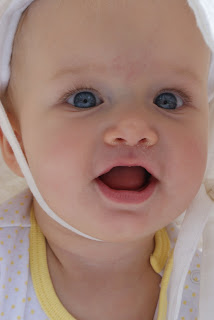 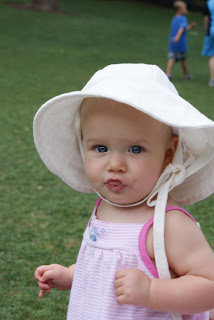 Bronwyn Hope (making her classic “I’m so excited I have to blow raspberries constantly” face!)

The white linen sunhats were made from a pattern lent to me by one of my followers: Sew4my3.  I love them! Your box of patterns will be returning soonish, but after the last trip to the post office, it may be a little while longer 🙂 Thank so much.