The question I’m asked most often right now with the girls is: Are they identical? My answer is an honest “I don’t know.”

If twins are the same gender there a few ways to tell if they are identical outside of DNA testing. Most of these signs are linked with the day the zygote split in two after fertilization.

If the egg split between days…

What complicates matters further is that in cases 1 and 2 the placentas can fuse together and look like one placenta at delivery. Unfortunately, the fused placenta can occur in dizygotic/fraternal twins as well.

My girls were delivered with one gigantic placenta and look a lot alike. So your guess is as good as mine. If you’re dying to know the answer to the girl’s zygosity, I’ll gladly let you fund a DNA test that’ll put you out about $100 (or more). If the girls want to know… well, they had better start saving their allowances… 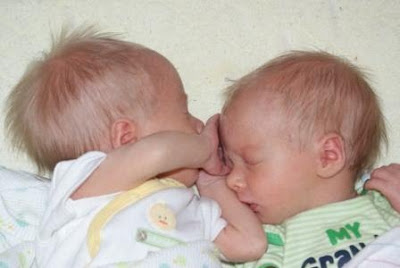 So in short, your guess is as good as mine and I’d love to hear it in the comment section 😉